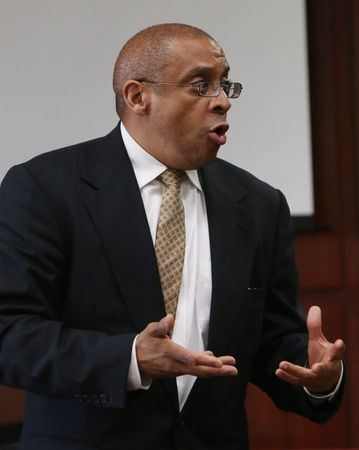 "I wanted to write something you might actually enjoy reading."

I've read director's pages before, or at least I have tried.  Boring!  I wanted to write something you might actually enjoy reading.  I have decided to tell you a story.  My favorite moment at the Muskegon County Public Defenders is . . .

A case, like all of our cases, landed in our laps because the defendant was unable to hire an attorney of her own choosing and because there was a likelihood that if convicted of the crime, she would be sent to prison.  If the allegations were true, it was a terrible crime. It was alleged that she had performed a sex act against her own four-month-old son!  The evidence was overwhelming.  The prosecutor had video tape - or at least still photographs - of the crime.  Furthermore, our client had confessed to a crime.  She'd even testified, under oath, against the man who had put her up to it helping to insure that he would spend a long, long time in prison.

But there was more to the crime than just the crime.  Our client had been trafficked.  That means she was used by another for, in this case, his sexual gratifications and commercial benefit.  She had been discovered on line by a predator who used vulnerable women to commit crimes.  And our client was just barely a woman: she was only nineteen years old.  Emotionally and intellectually, she was closer to fifteen. And she was a perfect trafficking victim.  Abused herself, she had almost no support or protection.  Her father was in prison.  She was using drugs and the father of her child was providing no assistance of any kind.

Traffickers don't entice their victims with drugs or money when they first meet.  The first thing the guy did to ensnare our client was to say to her, "I love you."  Words she had wanted to hear her whole life.

Still, you are not allowed to hurt others, even if you are being trafficked.  If you commit a crime, the trafficking circumstance ought to go, not to getting you out of your punishment, but to moderating the punishment.  It should soften the blow.

Where this office and the prosecutor's office disagreed is how much of a break our client should get given all the circumstances.  We couldn't agree.  So we took the case to trial.  The risk there was if we lost, our 19-year-old client would serve a minimum of 25 years in prison.

Working against us was that mountain of evidence I described before.  Against all that we marshalled the resources of the Muskegon County Public Defenders office.  We assigned a social work intern to our client to monitor her mental health through this 15-month ordeal.  Our legal researcher, Thomas Oatmen, combed the laws and wrote the motions in support of her case.  Our County Administrator, Mark Eisenbarth, had confidence enough to craft a budget with sufficient resources to insure that we could call on the the expert witnesses we needed.  We assigned Paula Baker Mathes, an attorney on our staff and quite frankly, one of the finest criminal litigators in the state, as lead counsel to try the case.  I say "lead counsel" because almost every lawyer in the department pitched in to some degree.  Karri Russel stepped in and kept the State from putting our client's child up for adoption outside of the child's biological family.  Others had suggestions, ideas and moral support.  They covered for Mrs. Mathes so she could devote time to this case.

In the end, our client was found guilty of a six year felony, not the 25 year felony.

Mrs. Mathes was nothing short of brilliant.

We celebrated around this office as if we had stood in front of a row of tanks and not flinched.

Now, having told you this story, I hope you take away from this letter that at this office we look at the whole person and not just the crime.  That we work as a multidisciplinary team, helping each over, bringing all of our experiences to bear. That we are supported by the Muskegon County Board of Commissioners and their Adminsitrator in assuring that no one goes without a fair trial in Muskegon County.  That we are passionate about our defense of our clients.

And that's really what I want you to know.

Proud to serve this community,